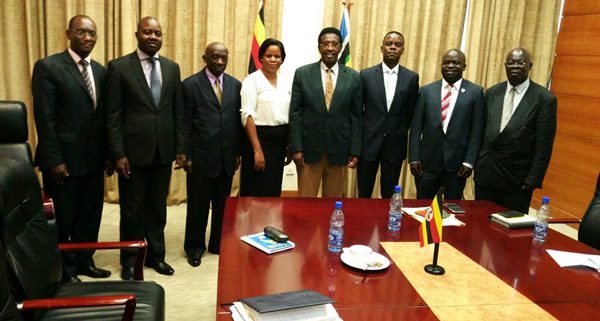 The power of the media and the advanced technological changes in the media industry call for better management and balanced freedoms.

This was highlighted by the Minister of Information and National Guidance Hon. Gen. Jim Muhwezi while meeting the Media Council members at his office in March 2016.
“The Media has greatly changed. Much as it plays a significant role as regards contributing to the direction of the country and the world at large,” the Minister pointed out;  “ these changes where social media has gone viral, publication online are more than print newspapers, the media capability can be used well or used badly” he said.

The Minister urged the Media Council to look at the urgent need to manage the industry, and its capability not to be abused and the need to balance freedoms of media and as well as the public for the stability of the country to be maintained.

During the deliberations it was noted that the post elections of 2016 review of the Media  brought out the role of the media as important but the Media Council has to play its responsibility as a Council not to have media be divisive while at the same time not to undermine the freedoms as per the Ugandan laws.

Hon. Jim Muhwezi  said the Ministry is  looking into reviewing the media laws in order to empower the regulatory body and make an authority strong enough to improve training of journalists, improved support of media houses and media practitioners to engage the public in development.

The Meeting noted the urgency to address the professional conduct of journalists especially regarding their qualifications and the need to plan for mandatory refresher courses for the Media just like other professional bodies like lawyers undertake periodically.

The Chairperson of the Media Council Mr. Paulo Ekochu noted that while the Council was majorly setup as a complaint based, efforts are being made to make it proactive. He welcomed the review of the media laws to empower the regulatory body and improving the support of Media houses and practitioners to carry out their role more professionally.
Members of the course agreed on a continuous engagement of the Media with increased sensitization about media laws. They emphasized that media practitioners need to be made more aware about the implications of their actions, how to apply their rights and how not to infringe on other people’s rights.

The Meeting agreed to focus on Media as a strong player in sustaining development of the country with provision of timely, accurate and correct information within the advancing information technology;  a strong pillar in building the image and marketing  of Uganda.