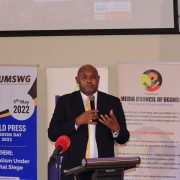 Hailed as the fourth pillar of democracy, journalists have time and again risked their lives and reputation to reveal the truth behind an incident, event or scandal.

In a bid to appreciate their hard work, every year, May 3rd is observed as World Press Freedom Day. The special day celebrates the spirit of journalism and recognises the dedication of journalists. It is extremely significant as the United Nations considers it an opportunity to celebrate the fundamental principles of press freedom, assess the state of the press freedom across the globe, defend the attacks on media independence and pay tribute to journalists who sacrificed their lives in the line of duty.

Every year a specific theme is chosen for World Press Day and this year’s theme is “Journalism under digital siege”. The theme not only highlights the ways that endanger journalism but also the consequences of all this public trust over digital communications. Mostly it focuses on the risks faced by journalists by surveillance and digitally-mediated attacks. The origin of World Press Day dates back to 1991, when an African journalist present at a UNESCO conference in Windhoek, which was based on ‘Promoting an independent Pluralistic African Media’, opened up about an idea to encourage press freedom in different parts of the world.

UNESCO adopted the Windhoek declaration on May 3rd, 1991, which aimed toward the development of a free, independent, and pluralistic press. The day also highlights the importance of freedom of journalists in a few countries like China, North Korea, Vietnam, Laos, Eritrea, Djibouti, Turkmenistan, Saudi Arabia, Syria, Iran, and Cuba that have severely limited press freedom. Last year’s theme was “Information as a public good”, which focused on the importance of cherishing the information as a public good and exploring the ways to strengthen the fourth pillar of democracy.

The theme of 2022 World Press Freedom Day, “Journalism under Digital Siege”, underlines the many new digital threats journalists are faced with, and demands responses from all concerned stakeholders.

Social media platforms should increase transparency about any actions to stop the spread of disinformation and promote trustworthy information instead.

Human rights-based governance is needed to ensure that internet companies do more to tackle disinformation, online hate speech, and potentially harmful content. This must be consistent with international standards on freedom of expression, access to information, and the safety of journalists.

Privacy standards must be strengthened in regard to threats to the right to privacy by digital technologies and practices such as data retention, artificial intelligence, spyware, and arbitrary surveillance.

Legal actions are needed to prevent and prosecute illegal surveillance of journalists, both by public and private parties, while there should be strengthened legal protection for journalists to keep their sources confidential.

Platforms and police services must take strong steps to prevent and eliminate online attacks against journalists, and orchestrated campaigns of harassment, intimidation, and violations of privacy.

Intensified measures need to be taken to protect women journalists, who are especially violently targeted online and offline, such as by increasing responsiveness to their situation and developing tools to identify and fight online violence.

Of immediate concern is the economic viability of media, as many outlets continue to bleed advertising revenues to Internet companies, resulting in news deserts and existential threats to media pluralism and independence.

The Member States, Internet intermediaries, and civil society all have a role to play to break the digital siege on journalism and find multi-stakeholder solutions to the challenges.

World Press Freedom Day 2022 is an opportunity to put into action the commitments made by all UNESCO member states as regard to the principles of the Windhoek +30 Declaration. The Windhoek +30 Declaration continues to be relevant in regard to its recognition that press freedom, independence, and pluralism are prerequisites to guarantee information as a public good that serves as a shared resource for the whole of humanity.

Now media viability, transparency of digital platforms, and citizens empowered with media and information literacy have been added to the core tasks.