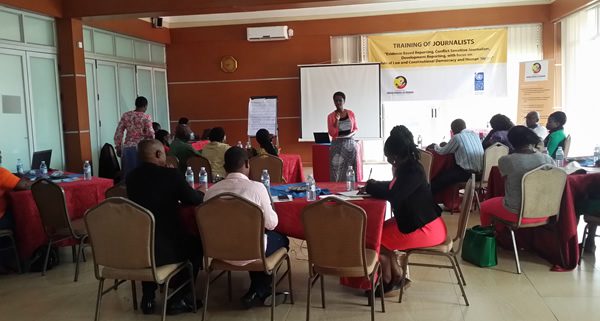 Media Council has embarked on training trainers of Journalists as a way to raise quality of Media content in Uganda, started off on 2nd November at Source of the Nile Hotel Jinja.

Under a partnership of Government and United Nations Development Programme (UNDP), the Council as an implementing party targets to improve quality of media content and effective public voice and participation in democratic processes and the building of a just society.

The target by the end of December 2016 is 80 journalists trained in Busoga and Mt. Elgon regions as the initial step to demonstrate the acquired skills in training of other journalists with supervision of experts and Media Council. The trainings sessions are planned to be extended to other regions in future. Uganda’s Vision 2040 emphasizes good governance and institutional robustness as the backbone of transformation. This transformation takes note that it is equally important to ensure that quality of media content within the conventional and social media strategically support shaping attitudes and behaviors to:
(a) Foster social engagement for effective and sustainable culture of constitutional democracy,
(b) Empower communities alongside protection of human rights and effective implementation of relevant laws through amplified public voice and
(c)The media also plays a role that ensures affirmative action for women, youth and marginalized groups especially for conflict sensitive reporting.

Under Rule of Law and Constitutional Democracy programme, the Government of Uganda and UNDP aim to build capacity under, Rule of Law, separation of Powers and constitutional democracy to be entrenched in Uganda and all individuals are treated equally under the law and have equitable access to justice by 2020.

Training of journalists for Northern Uganda on evidence based reporting, conflict...